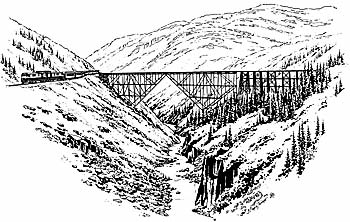 The original ink line drawing on which the new artwork was based.
© 2004 J. Craig Thorpe
Commissioned by the White Pass & Yukon Route
oil-on-canvas, 16”x27”

This third painting in the calendar series for the WP&YR actually began life as an ink line drawing. In early 2004, at the request of the railway’s management team, I produced a black and white drawing of the classic steel bridge as viewed from a train on the newer 18A bridge. (This designation refers to the first bridge within the 18th mile from Skagway headed north.) There had been several discussions about using “Steel Bridge” in a calendar painting because of its historic significance and spectacular appearance. However no specific composition had been considered. With the line drawing in hand we had that essential composition. I spent several days at the railway in June, with some of that time dedicated to walking and photographing the area around the bridge with Michael Brandt, VP of Marketing and Planning. There’s nothing like on the-ground research to prep for a painting. I got a whole new appreciation for the issues faced by the construction crews in 1898 when they first built a switchback system to cross “Cut-off Gulch”. The steel bridge was finished in the winter of 1901 and was at the time the highest steel cantilever structure in the world. It served faithfully until 1969 when the new 18A bridge and tunnel were built to handle longer and heavier trains of zinc, silver and lead concentrates headed for the Skagway docks. 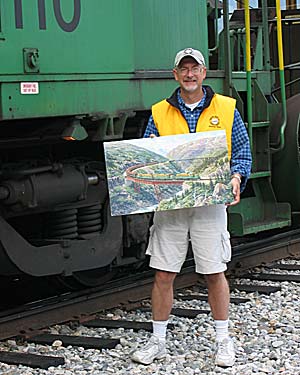 The research trip was not without its own excitement. I despise heights, and crossing that bridge without handrails 125’ – over what seemed to be a class 10 rapids – demanded no small amount of determination. When we returned to Skagway I also learned that the train crew, which had dropped us off, spotted several bears right across the gulch…and near our photo destination. Ah, the risks of the railway artist… Back in the studio, and working from photos and sketches, I chose a “station point” for the painting that was high enough to show the old bridge as well as help the viewer sense the sweep of the right-of way and the new bridge. Ever since my first ride over the line I have been fascinated with the scale and varied textures of the mountains, and this spot provides a classic example. The train is dwarfed by the landform that rolls down from the left. By painting it right into the top edge of the canvas I have suggested that it keeps going up. Indeed it does! From this vantage point we get a hint of the white water below the bridge that necessitated these engineering challenges. Portions of the Sawtooth Range are visible in the center background. The northbound train is shown pulled by three Alco (American Locomotive Company’s Canadian affiliate Montreal Locomotive Works) 101-class diesels. These 136-ton, 1200-horsepower engines were built to augment the older General Electric 90-class units. The WP&YR needed this extra power to handle the heavier zinc, silver and lead ores being brought out of the Yukon during the boom years of the 1960’s and 1970’s. The second engine, #107, was one of 5 such locomotives sold in the early 1990’s to a narrow gauge railway in Colombia, South America. With the increased passenger business in the late 1990’s, the WP&YR brought the locomotives back to Skagway where they are once again in daily service to White Pass and beyond. The whole composition of “Spanning the Centuries” vignettes the life of this unique railway. From the end of the 19th Century, through the 20th and now into the 21st, the people of the WP&YR have spanned many a chasm. To be sure, there were the literal engineering challenges, such as this one at “Cut-off Gulch,” solved in 1901 but then creatively modified 6 decades later. But perhaps more daunting were the figurative chasms of labor issues, financial downturns and shifting markets. This most remarkable of railways continues to demonstrate a resourcefulness through its management, operations and on-board personnel. A 2004 record season of over 400,000 passengers attests to their vision and dedication. The White Pass is indeed creating a legacy of history, innovation and creativity played out in the wild beauty of Alaska, British Columbia and the Yukon. It is my pleasure to help interpret that legacy.