Engine #52 operated its first year within the Skagway valley and later on, along the shores of Lake Bennett. In 1931 it was moved to Taku Tram duty, operating from Taku to Scotia Bay connecting with the “M/V Tahrane”, carrying guests to and from Atlin, BC and the WP&YR’s “Atlin Inn”. It was retired from service in 1936. Recovered in 1964 from a spur at Taku, it was brought to Skagway for its initial renovation and display.

The locomotive was unfortunately damaged in a roundhouse fire in October 1969. In 1971, after minor repairs, it was moved to its current location where it has sat in deteriorating conditions for the last 29 years. Gary C. Danielson, President for the company said: ” After asbestos removal and clean up is completed, White Pass will begin an evaluation of restoration work to be done on the engine.”

All work will be done by White Pass employees at their Skagway maintenance facility. Restoration work is expected to take a minimum of two and a half years. 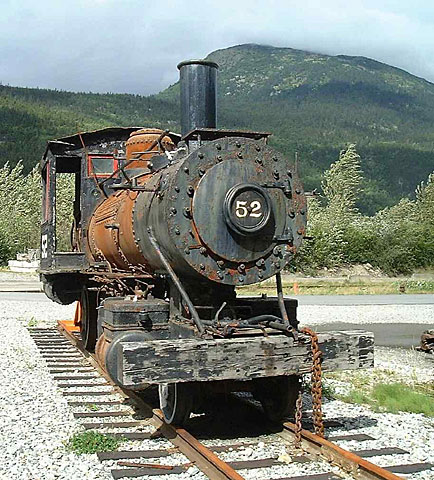 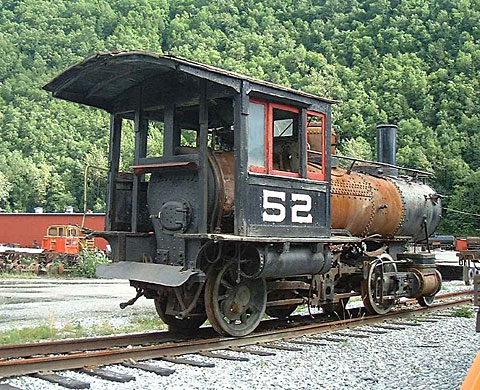 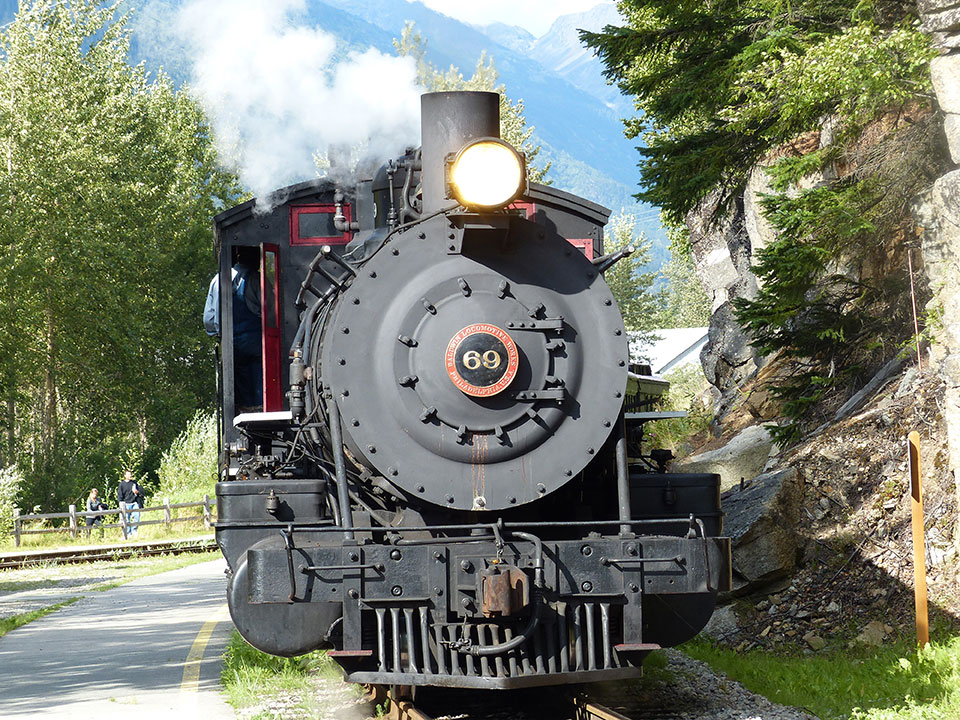 In June 1908 the Baldwin Locomotive Works Co. of Philadelphia, delivered the second of two specially designed narrow gauge steam locomotives that had been ordered by the WP&YR. Designated as Engine No. 69, this mechanical workhorse would spend the next 46 years far puffing across rugged Alaskan and Canadian mountain ranges that had been conquered by the WP&YR.

The first locomotives used by the WP&YR were small tea kettles acquired secondhand. Traffic demands by 1900 prompted the company to order several brand new locomotives built to its specifications. WP&YR officials recognized a need for additional motive power that would primarily be used to help pull or push freight and passenger trains over the steep grades encountered between Skagway and the summit over White Pass, where the track level rises more than two feet in every 100 feet of distance.

At the time of completion Engine 69, at 134,369 pounds, was one of the heaviest narrow gauge, outside-frame locomotives built by Baldwin. It was capable of tackling grades of 3.9 percent and curves and radiuses of up to 20 degrees. The tractive power of 69 was equivalent to that of many standard-gauge engines and it was well-suited to running over rails weighing 56 pounds per yard.

In the course of its now-100-year history, the venerable Baldwin 2-8-0 has served in two countries, has transported thousands for either fun or profit. Now once again shall Engine No. 69 sound its whistle across majestic mountains of Alaska & the Yukon. 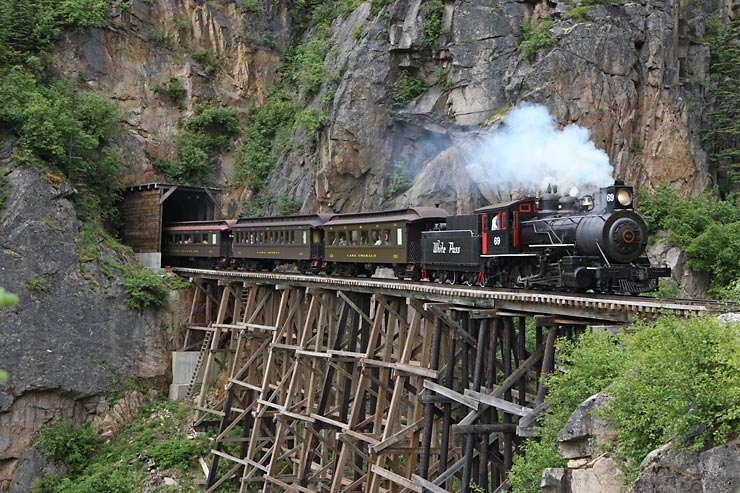 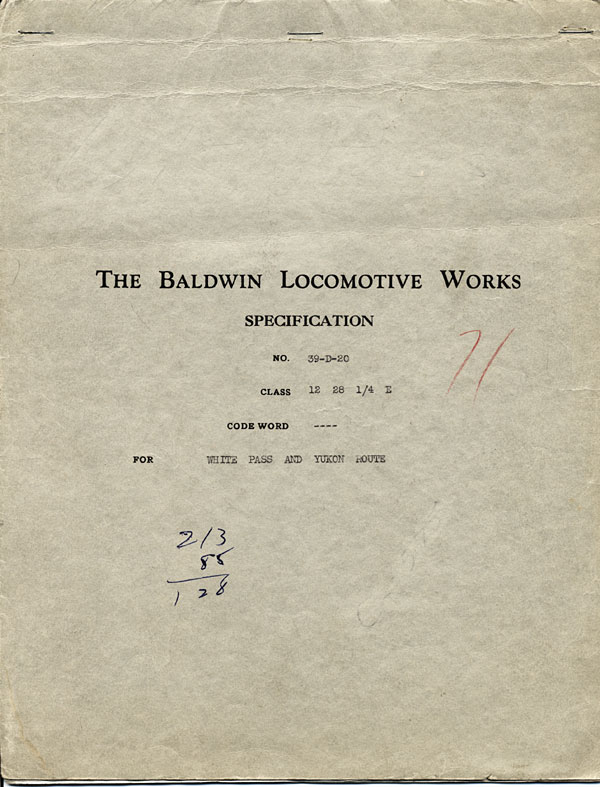 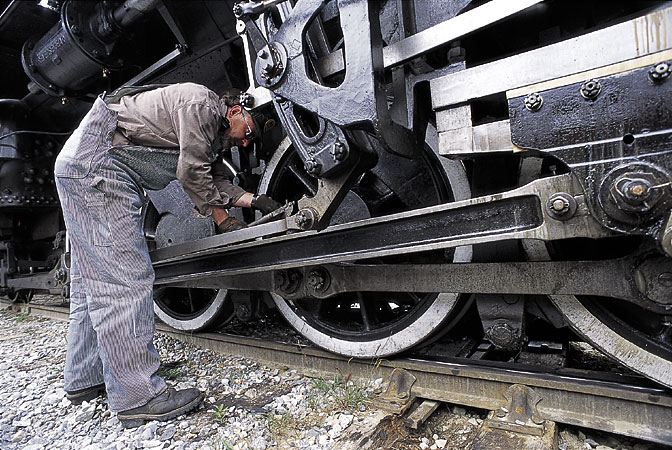 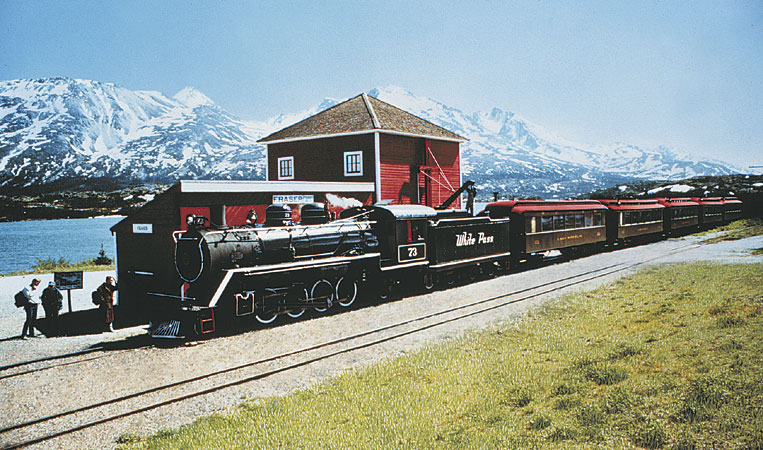 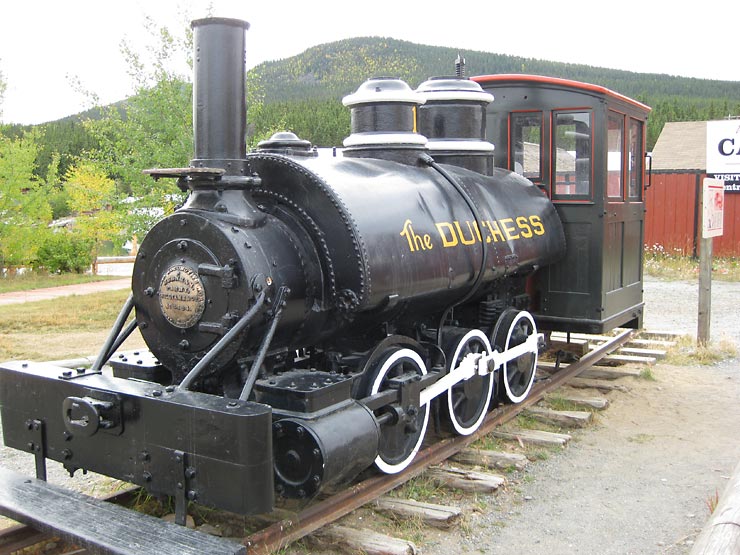 Originally, Dunsmuir, Diggle & Co. 30-inch gauge 0-6-0T #2, Duchess. Dunsmuir, Diggle sold to Wellington Colliery R.R. in 1883. Duchess converted to a 2-4-0T by disconnecting the front drivers, and gauge widened to 3-feet, probably about 1889. Resold to Albion Iron Works (dealer) thereafter. Resold to John Irving Navigation Co. in April 1900 for use on the Taku Tram. Irving Navigation purchased by the White Pass in June 1900. Duchess powered the Taku Tram from 1900 to 1920. Used as a trash burner at Carcross, Yukon from 1920 to 1931. Put on display at Carcross in 1931.

The duchess has been restored and the wood cab has been refurbished to it’s original condition. 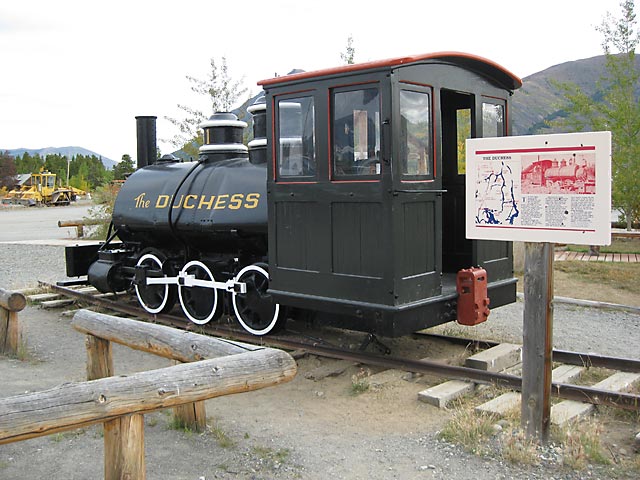 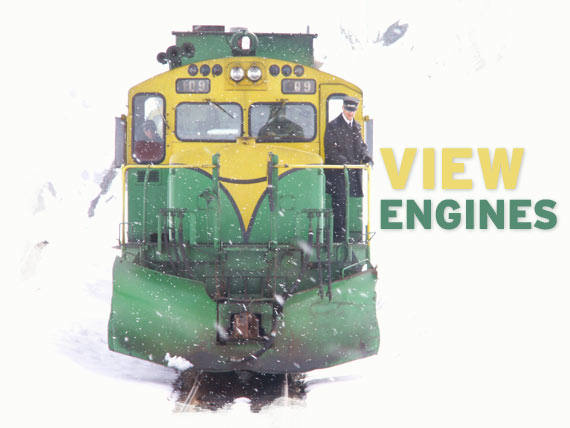