Railfan and Modeler does White Pass GEs in G-Scale 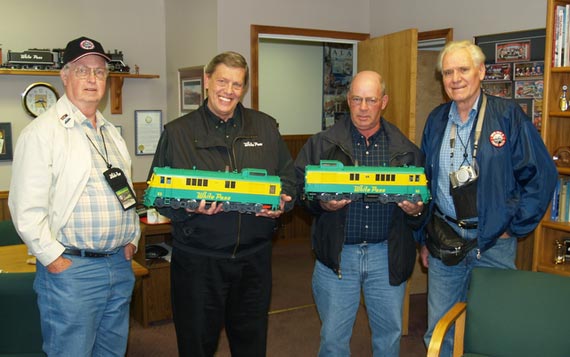 Railfan and modeler Werner Grundman (shown far right) shared the masterpieces he created with White Pass President Gary C. Danielson and Rail Superintendent Ed Hanousek during his July visit to White Pass. He was accompanied by his friend Lorne Scott (shown far left) who did the incredible paint job.

He modeled White Pass’ signature shovelnose GE locomotives No.90 and 93 in garden railroad scale out of brass. These two one-of-a-kind models are meticulously detailed and are even painted with the same paint used by CEECO on the rebuild of the No.90. The models feature LGB running gear and working lights.

No.90 will be left in Skagway on display for the balance of the season to celebrate White Pass’ locomotive modernization program.

Werner and his wife celebrated their 50th wedding anniversary with this trip to Skagway and were joined by Lorne and his wife. He unveiled the highly anticipated models here in Skagway.

“Wow!” was a common response to the models. Staff and visitors alike appreciated the research and craftsmanship embodied in the models.

Werner’s models receive international attention with railfans and modelers and will be featured in numerous magazines, newsletters and websites.

As a “friend of the White Pass”, he is a goodwill ambassador for the people, history and equipment of the WP&YR.

Werner and Lorne were treated to cab rides with Engineer John Westfall, a shops tour and several rail excursions as an expression of thanks from White Pass for sharing his passion and talent with us.