CARCROSS, YT – The White Pass and Yukon Route (WP&YR) of Skagway, Alaska and the Carcross/Tagish First Nation of Carcross Yukon, signed a Memorandum of Understanding today in Carcross, Yukon. This Memorandum of Understanding outlines the common goals of the railroad and the First Nation government in their efforts to see a more prosperous tourism and business community in the Carcross area.

Carcross development opportunities have come into focus as the Carcross community and the First Nation promote the development of the four-star 120-room Four Mountains Resort on a knoll overlooking Lake Bennett and the railroad is evaluating the viability of extending train service back to Carcross.

“This First Nation is very excited about this working agreement with the White Pass and Yukon Route Railroad. Our respective interests in seeing tourism grow and in this area has lead to this formal arrangement that grew out of years of working together,” said Chief Andy Carvill, who signed the agreement. “Having the train come into Carcross, and to the resort site, would be extremely beneficial to our project and to tourism and business development in the area.” 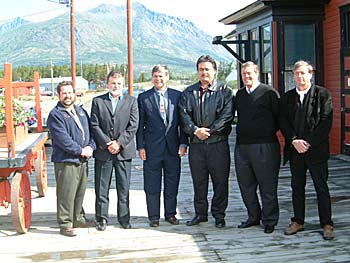 Gary C. Danielson, President of the WP&YR stated that, “The White Pass & Yukon Route has a rich history in Carcross and involved access by rail, air, paddlewheeler and bus. Our future lies in interpreting and celebrating our past — some future products and markets could well be developed on the inherent values and virtues of Carcross, its people and its stories.”

Danielson added, “We look forward to the completion of the Four Mountains Resort project which we believe will be a showcase for the rich tradition and heritage of the CTFN people and serve as the catalyst for developing Carcross as a cultural destination. We’re pleased to be a partner with CTFN in engaging all the stakeholders in scoping out our collective futures in Carcross.”

The Four Mountains project is the cornerstone of the CTFN economic agenda. A resort with a four-star hotel, cultural component and adventure tourism that will be marketed to a higher-end destination visitor. It is projected to act as a starting point to adventures on the land and water and it is expected that it will create short term and long term employment and business in the Southern Lakes region. It will also feature the First Nation culture in all components of the project and will help develop a stronger First Nation tourism industry.The White Pass & Yukon Route narrow gauge railway was built in 1898 during the Klondike Gold Rush and is an International Historic Civil Engineering Landmark – a designation shared with the Panama Canal, the Eiffel Tower and the Statue of Liberty.

The WP&YR railroad has carried more than 300,000 passengers per year in its last 3 years making it Alaska’s most popular shore excursion. The railroad has set numerous one-day records this year and hopes to carry 30,000 more people in 2003 than it did in 2002.

This site uses Akismet to reduce spam. Learn how your comment data is processed.