The White Pass & Yukon Route train made its way along the shore of Lake Bennett at a leisurely pace. 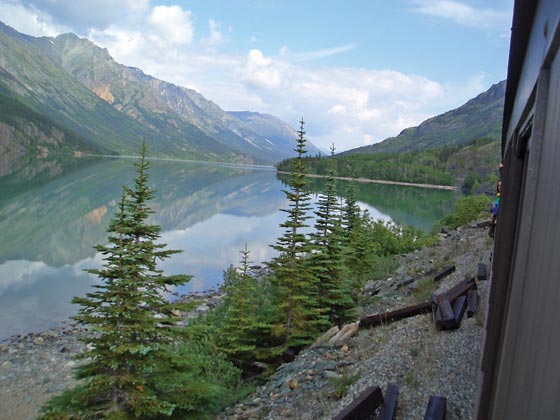 I was standing on the outdoor platform at the end of the train enjoying the scenery, chatting with fellow passengers. Someone called out, “Bear ahead!” and we all eagerly scanned the bush. A beautiful large grizzly came into view, watching the train roll by with a mixture of curiosity and apprehension.

I wondered whether that bear had ever seen a train before. In 1982, service into Carcross was suspended, resuming 25 years later in May of this year. Although the end of the line for the southbound journey is Skagway, I was taking advantage of the “new” service and doing an all-Canadian excursion, originating in Carcross and ending at Fraser, the Canadian Customs location.

The WP&YR complex in Carcross, built in 1910, is now the Northern end of the line. It is a designated Canadian Heritage Railway Station and houses The Train Shoppe (where WP&YR memorabilia, artwork and gourmet coffee are available) as well as the Visitor Information Centre.

The depot and surrounding yard are home to historical exhibits, First Nation performances and archival photo displays. It is one of the many fascinating buildings in Carcross, some of which were relocated from abandoned mining communities, – including Bennett City which is where we were heading. As we set off, complementary copies of the on-board magazine and bottles of water were distributed to the passengers.

When the first train of the season left Carcross in May, there was still ice on Lake Bennett.Today, the water was a dark turquoise, lightly lapping the rocky shore, eventually smoothing out to a fl at, calm surface on which the mountains were perfectly reflected.

The wildflowers were prolific: Jacob’s Ladder, Arnica, Columbine and Lupine were just a few of the flora we saw.

Small, rushing waterfalls appeared here and there. The metal platform gates rattled as the train shifted from side to side. Somewhere along the line we crossed the border into British Columbia.

“Everything OK back here?” asked one of the friendly White Pass crew, stepping out to join us on the platform. He distributed a second booklet, Bennett: Historic Adventure, which included information about the self-guided tour of the old town-site. The engine horn sounded, loudly announcing our arrival.

Lunch (included in the ticket price) was served in the railway depot. It was a traditional eatinghouse meal of stew, beans and sourdough bread. Dessert was a large slice of apple pie served Canadian-style with a slice of cheddar and coffee.

As soon as we finished eating, we headed outside to wander around what remains of Bennett City, where some 30,000 Stampeders spent the winter of 1897-98 waiting for the ice to go out so they could set sail for the gold fields on thousands of hand-hewn rafts and boats.Trees now flourish on the once denuded hillsides.

The former Gold Rush communities of Bennett and Lindemann are part of Parks Canada’s Chilkoot Trail National Historic Site. This is the perfect opportunity to take a short walk along the Trail and imagine its original terminus, lined with hotels, saloons and merchants, all of which are now gone.

This Historic Site is part of The Klondike Gold Rush International Historical Park, shared by Canada and the United States. Information panels provide stories and pictures of the First Nations’ history and use of the land in this area. Dominating the scene is the wooden steeple of St. Andrew’s Presbyterian Church. Built in 1899, it remains a tribute to the men and women of the Gold Rush as the ice goes out on Lake Bennett year after year.

A blast from the engine’s horn called us back to the train at the end of our two-hour stay. Continuing southward, a beaver dam, several swimming water birds and two more bears were spotted.

Another blast of the horn preceded the only road crossing on the Canadian section of the trip at the South Klondike Highway beside Log Cabin. As we approached Fraser, the railway parallelled the road and we could see traffic instead of wildlife … we were back in civilization.

For further information, visit the Whitehorse sales office located in the WP&YR station building at First Avenue and Main Street, phone 633-5710 or visit the website at www.wpyr.com.

Yukon Alaska Tourist Tours can provide connecting motor coach service. For details, visit its office on Hanson Street across from the Visitor Information Centre or phone 668-5944. Tickets are available at both locations.

Written by Catherine Millar. This story is courtesty of What’s Up Yukon.